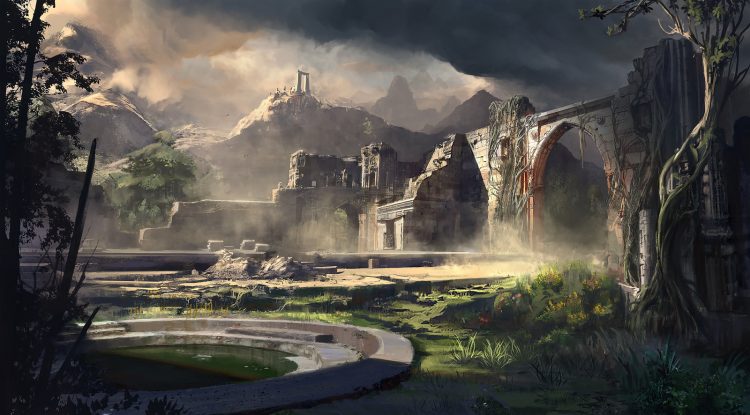 Gate of the Ancient

“Time is but a door, Death but a window.” An ancient proverb.


It was freezing—the coldest winter in man’s memory. Priest Thomly called it “Elyn´s breath on the world.” Everything outside was frozen solid, the animals where nowhere to be found and the lands of man, had to rely on the store they had and the kindness of others.

In the deep southern desert, Master Sage Ibrahim, an old and wise Mage of the White Order of the Stars, was star watching, in the high Observatory, as a star called “Fathers Eye”. for no reason, vanished — one minute it was there, and the next, it blinked away. It was a curiosity even for him.
He made several notes in the Star Journal adding the time and date for the celestial event, for his colleagues to investigate.
Tenderly closing the weighty ledger, the Master found himself exhausted after a long and tedious night at the telescope and took the long way down from the Observatory, to his quarters in the Citadel of the Sun.

Near the center of The Imperial City, below the Cathedral of the gods, three new symbols glowed among the records of heroes, inscribed on the Wall of the World.

Sara Malferion gave birth, past the High Night hour, to a pink and screaming boy with fiery hair. When the old midwife cleaned him up and checked him over, she scowled. And when she gave him over to Sara, she did so with a dry remark: “the screamer has all his toes and fingers”. He soon fell quiet and rested in his mother’s warm embrace, oblivious to the bitterness of the cold outside.
Fortune had befallen the Malferion Clan, their stores were full, their pantries brimming. They had need for nothing, while the others faced agonizing questions of life-or-death. Haudin´s hunters had been unsuccessful in hunting game, and starvation gripped the villagers. The Malferion’s shared what they could and organized a great feast in celebration of the birth, many a soul was spared that winter, due to their generosity.

At the same time in the Temple of Aliandra at the Citadel of the Sun, located deep in the Southern Desert a girl was born, while her mother passed from a fever. Despite the Healers efforts, the magic didn’t take, the girl was fatherless, and the girl was handed over to the Order of Giles, a home for Orphans.

And many miles to the north, past the Black Wall mountains, a frail boy was born a few minutes past the Old Night, in the town of Ice Peak. Their wooden hut in which he came into the world, showed status in a village where normal dwellings were tents made of huge Olan skins. Odd boxes and jars were placed in neat rows on the shelves, herbs and twigs hung in bundles from the ceiling. The hut smelled of spices mixed with blood and sweat. After the delivery, the midwife placed the infant on the mother’s chest: “the boy is well, Mamani”. Mamani was a term of respect, of status. Of loyalty.

Far to the north, beyond civilization, in a dark and forgotten cavern deep beneath the ice, something moved.

Whats happening and where?